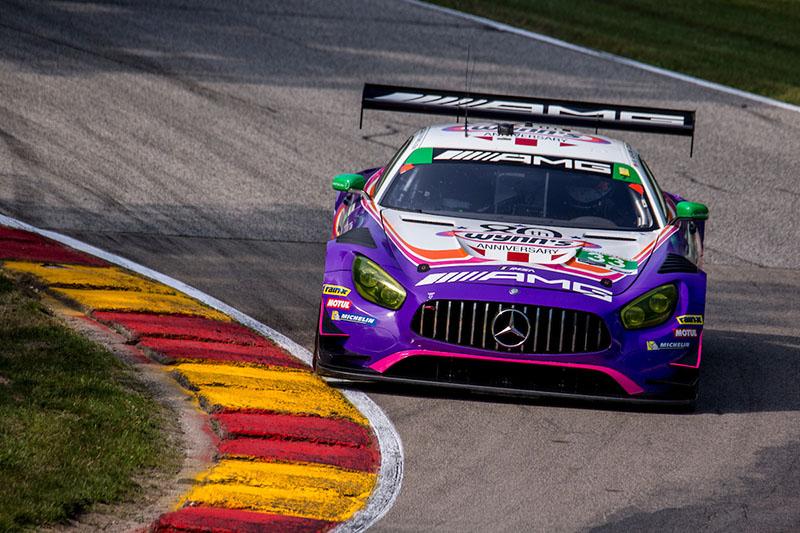 The two-hour and 40-minute IMSA Road Race Showcase will be televised in same-day coverage on NBC Sports Network (NBCSN) tonight at 6 p.m. EDT. Live streaming of the race will be available on the NBC Sports App and NBCSports.com beginning at 2:30 p.m. EDT.

Keating’s pole is the first for Wynn’s in its return to major sports car racing competition and his first in six years of IMSA GT Daytona (GTD) competition.

“I’m excited to have our first pole ever in six years running in IMSA,” Keating said. “If you got to choose where you start from, you want to start from the pole. Wynn’s has soem great guests here. Mercedes-AMG has a bunch of guests here. I love this track. It’s a place that really rewards a great setup and rewards a confident driver. I was able to be on the gas and be full throttle in places that I’ve never been able to be full throttle before. I was able to carry more speed in places than I ever have before. It’s fun to be fast around here.”

The track record time of 2:05.250 (116.349 mph) came on Keating’s third flying lap of the scheduled 15-minute GTD qualifying session, which was cut short with five minutes to go when lightning was seen in the vicinity of the 4.048-mile Road America circuit.

Keating, who co-drives with longtime teammate Jeroen Bleekemolen, will lead the GTD field to the green flag for the start of today’s featured two-hour and 40-minute race at 1:35 p.m. CDT.

An automotive products technology leader celebrating its 80th Anniversary in 2019, Wynn’s is in a partnership with Ben Keating and Mercedes-AMG Team Riley Motorsports for this year’s 50th Anniversary IMSA Season in support of the team’s No. 33 Mercedes-AMG GT3.

The Wynn’s partnership with Mercedes-AMG Team Riley features a special throwback livery that the No. 33 carries throughout Wynn’s 80th year and 50th Anniversary IMSA Season, including this weekend at Road America. The multi-color scheme was run in 1987 by Hotchkis on a Porsche 962 IMSA GTP (Grand Touring Prototype) entry that was co-driven by John Hotchkis, John Hotchkis Jr. and Jim Adams.