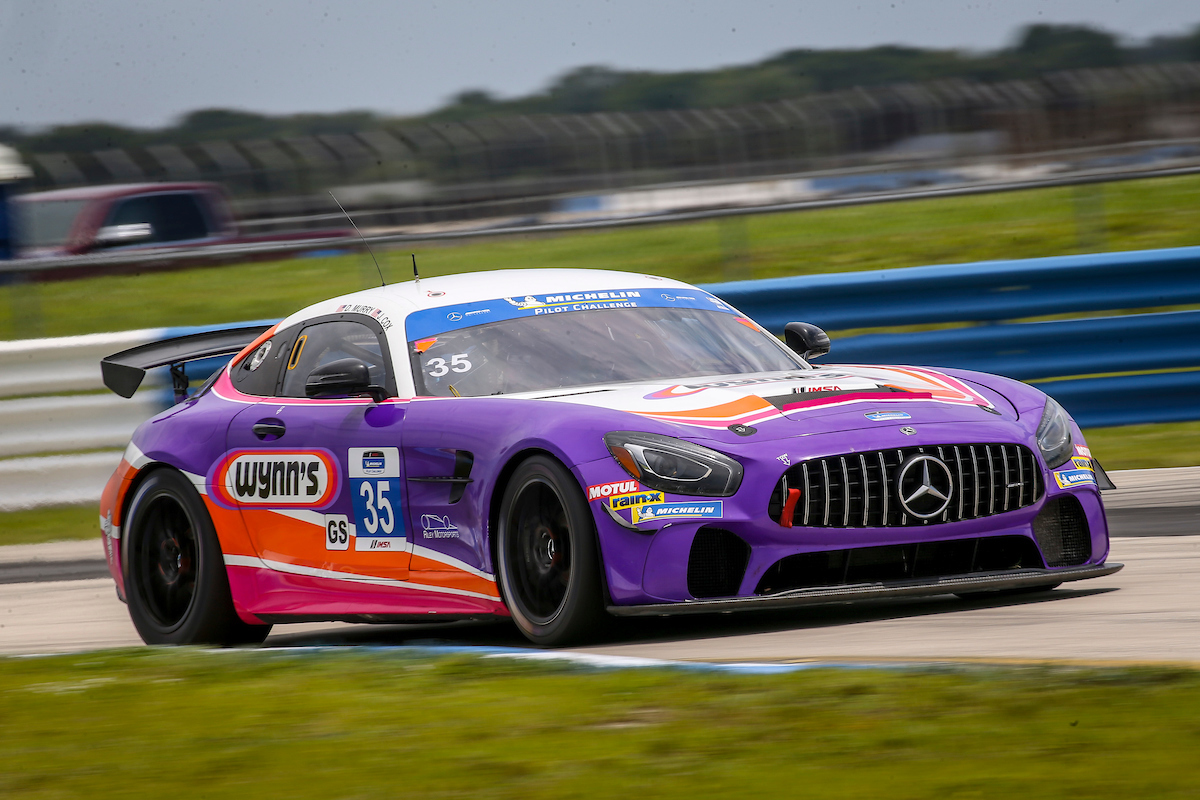 SEBRING, Florida. Seven Mercedes-AMG Motorsport Customer Racing teams across two IMSA racing series look to pick up where they left off after a competitive showing last July at Sebring International Raceway, during this weekend’s season-ending 68th Annual 12 Hours of Sebring weekend on the 3.74-mile mid-Florida road course. Saturday’s featured 12 Hours of Sebring is the 2020 finale for the IMSA WeatherTech SportsCar Championship. Friday’s highlight is the season-ending IMSA Michelin Pilot Challenge race, in which Mercedes-AMG GT4 teams have a chance to secure the second-straight Pilot Challenge Grand Sport (GS) class manufacturer championship for Mercedes-AMG.

The oldest sports car race in the United States, the 12 Hours of Sebring has been run primarily on a traditional mid-March date for well over half a century. This year’s 68th running of the 12 Hour was moved to November, however, as one of many schedule changes and date shifts IMSA undertook in response to the COVID-19 shutdown.

Another schedule change was the creation of a second and unprecedented summer IMSA race weekend at Sebring in July. Both the IMSA WeatherTech Championship and the IMSA Michelin Pilot Challenge series competed at Sebring on July 16 – 18, and Mercedes-AMG Motorsport Customer Racing teams secured fourth-place finishes after nearly reaching the podium in both races.

The No. 74 Riley Motorsports Mercedes-AMG GT3, co-driven by Gar Robinson and Lawson Aschenbach, was closing on the third-place GT Daytona (GTD) class competitor when the checkered flag fell in July’s two-hour and 40-minute WeatherTech Championship race.

Robinson, Aschenbach, and the No. 74 team will build upon that July momentum this weekend when they carry the Mercedes-AMG flag in Saturday’s 12 Hours of Sebring.

The 12-hour race runs from 10:10 a.m. to 10:10 p.m. EST this Saturday, November 14, and can be viewed live in the U.S. beginning at 10 a.m. EST on the NBC Sports Network (NBCSN). The live coverage shifts to the flagship NBC network at 3 p.m. EST before returning to NBSCN at 6 p.m. EST through the race’s conclusion. International viewers can watch live at www.IMSA.com/tv.

Familiar Riley Motorsports driver Marc Miller joins Robinson and Aschenbach behind the wheel of the No. 74 Mercedes-AMG GT3 for Saturday’s 12-hour race. Miller co-drove with the team to a GTD victory in the 2016 Petit Le Mans at Michelin Raceway Road Atlanta.

Road Atlanta was also the site of the No. 74 team’s best endurance race result this season, a fourth place in the Labor Day weekend six-hour race at Michelin Raceway. The finish split a mid-season run of solid results for the No. 74 that included third at VIRginia International Raceway and a season-best second at Mid-Ohio Sports Car Course.

While similar outcomes have not materialized in three most recent GTD races, the No. 74 Mercedes-AMG GT3 team and drivers are confident in a return to podium form this weekend at Sebring.

In July’s two-hour Michelin Pilot Challenge race at Sebring, a thunderstorm ended the race 15 minutes early and stopped a likely charge to the podium by Russell Ward and Indy Dontje in the No. 4 Winward Racing Mercedes-AMG GT4.

The fourth-place Sebring result is one of six top-five finishes for the No. 4 in this year’s first nine races, including a pair of third-place showings at Daytona and Mid-Ohio. Ward has co-driven the No. 4 this season with Billy Johnson, Nico Bastian, and primary teammate Dontje, who shared in the podium finishes and returns this weekend for the finale.

Ward and Dontje compete alongside the No. 57 Winward Racing Mercedes-AMG GT4 shared by Ward’s father, Bryce Ward, and his co-driver Philip Ellis. The No. 57 team’s best result this season was second at Daytona in January where Ellis set the fastest GS race lap in his track debut.

Another two-car entry comes from Murillo Racing that fields the No. 56 Mercedes-AMG GT4 for Jeff Mosing and Eric Foss, along with the sister No. 65 Mercedes-AMG GT4 co-driven this weekend by Tim Probert and Justin Piscitell.

Mosing, Foss, and the No. 56 team have finished in the top-10 in every race this season and moved to third in the GS team and driver championship standings, following the most recent race at WeatherTech Raceway Laguna Seca on Halloween weekend.

Although a top-two championship finish is out of reach, a tight race for third in the GS team and driver championships is forming up to be an all Mercedes-AMG GT4 battle at Sebring.

Foss, Mosing, and the No. 56 team in third are one point ahead of the No. 35 Riley Motorsports Mercedes-AMG GT4 of Jim Cox and Dylan Murry, while Russell Ward and the No. 4 team trail the No. 56 squad by just four points.

A countless string of mathematical scenarios will play out as the championship is decided in Friday’s two-hour race, but an easier-said-than-done model could give Mercedes-AMG the repeat title with a race win and finishes third or lower by the manufacturer rivals.

This year’s only Mercedes-AMG GT4 winner in Pilot Challenge competition is the No. 35 Riley Motorsports team, which captured the season-opening race at Daytona with Cox, Murry, and Jeroen Bleekemolen co-driving.

The No. 35 team and drivers return to Sebring seeking a return of the good fortune that helped secure the Daytona victory, and also set the fastest race lap at Sebring in July after Cox qualified a season-best fifth. The quick pace has continued all season, but a challenging second half of the year has produced only a second-place at Mid-Ohio as the lone highlight heading into the Sebring finale.

The sixth Mercedes-AMG GT4 team competing at Sebring is the duo of Anton Dias Perera and Dan Clarke, who are set for their third start of the season. Perera fielded his Mercedes-AMG GT4 with another team for the Daytona opener but returned to competition last month at Road Atlanta partnered with LAP Motorsports and now carrying No. 10 on his car.

Lawson Aschenbach, Driver – No. 74 Riley Motorsports Mercedes-AMG GT3: “I feel the Mercedes-AMG GT3 is the perfect car for Sebring. Let’s face it, this track is brutal on the car and drivers. Twelve hours of bumps, high speeds, heavy brake zones, and limited grip is tough on any car. However, I know our hot rod will navigate these extremes very well. The Mercedes-AMG has great high-speed stability, heavy downforce levels to maximize brake zones, and great long run pace, especially in power on traction zones. I have no doubt this is the right car for the track. We’ve been knocking on the door of a win many times this year and, although the last couple of races haven’t produced the results we expected, we know we are primed for a win. The team and drivers are firing on all cylinders and I’m excited to bring Marc Miller into the fold this weekend. He’s a proven winner and has the speed to help move us forward. It’s safe to say that I’ve had this race circled on my calendar ever since July. We are ready to end this season on a high note!”

Dylan Murry, Driver – No. 35 Riley Motorsports Mercedes-AMG GT4: “I think one of the main reasons why our car is always so fast at Sebring is the details of the Mercedes-AMG GT4 itself. This car is fantastic at tracks like this. It handles the bumps extremely well and is able to carry very good speed through the corners. I’m looking forward to showing our speed again. After all, we had the fastest race lap back in July, and Sebring is definitely our strong track. Jim is fantastic there, and Riley Motorsports really knows how to set up a Mercedes-AMG at that track. I am sure we will have the speed. It would be great to bring home another win at this track.”

Indy Dontje, Driver – No. 4 Winward Racing Mercedes-AMG GT4: “This is the last race of my crazy 2020 season. It has been a hectic year for me. I had my duties in Germany for ADAC GT Masters, so I couldn’t attend the last two races at Laguna Seca and Road Atlanta, but I am happy to be back this weekend at Sebring. We already had one race there in July where we were looking really strong in our Mercedes-AMG GT4. We finished fourth and it might have been higher if the race hadn’t been interrupted by a safety car. I am looking forward to coming back and see if we can finish the season with the podium we missed in July. I have really liked Sebring since the first time I drove there. I think it is a great track with some typically authentic corners. For example, the last corner, Turn 17, is really bumpy and you need a really good line and rhythm through there. There are several other corners where you really have to be on point. They are difficult as well, but I always look forward to the challenge.”