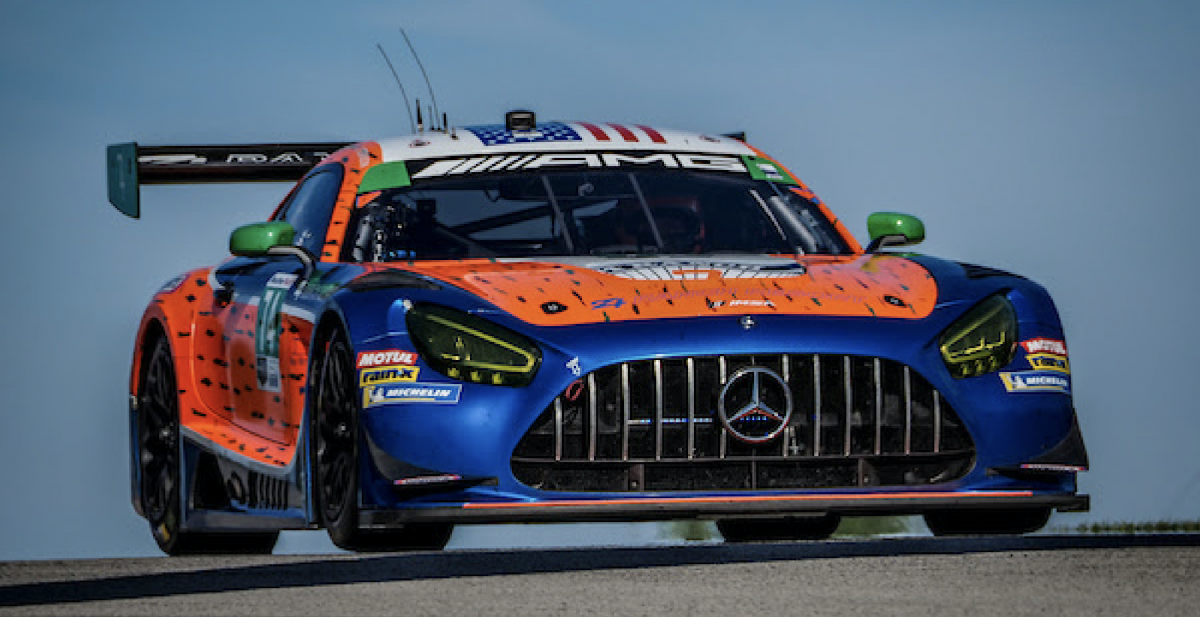 Robinson and Aschenbach are new to Riley Motorsports in 2020 but the team returns with the same management, technical personnel and pit crew that were a key part of last year’s victory. Riley has campaigned a Mercedes-AMG GT3 in IMSA GTD competition since 2017.

The No. 74 team and drivers came close to podium finishes in the most recent IMSA WeatherTech Championship races at Road America earlier this month, and at Sebring International Raceway in July. A finish topping their season-best fourth at Sebring is this weekend’s goal.

This weekend’s featured two-hour and 40-minute IMSA WeatherTech SportsCar Championship this Saturday, August 22, can be seen in next-day coverage on the NBC Sports Network (NBCSN) on Sunday, August 23, at 10 a.m. EDT.

Live flag-to-flag coverage of the race Saturday at 2:00 p.m. EDT is available domestically via TrackPass on NBC Sports Gold and internationally at www.IMSA.tv.

The race goes green at 2:55 p.m. EDT and can be viewed live through TrackPass on NBC Sports Gold and internationally at www.IMSA.tv. IMSA Radio also provides audio commentary for each session throughout the weekend on IMSARadio.com.

Following a fourth-place finish one race ago at Road America, Cox, Murry and the No. 35 team head to VIR third in the GS driver and team championship standings, only eight points removed from first place.

The No. 35 team anchored the first 1-2-3 finish for the Mercedes-AMG GT4 in worldwide competition at Daytona. A pair of Winward Racing entries followed Murry across the finish line at Daytona, and return for this weekend’s VIR competition.

Ellis returns to co-drive with Bryce Ward for his first start with the team since Daytona, where he set the fastest GS race lap in the No. 57.

Dontje is back this weekend with Russell Ward in the No. 4 after missing the most recent round at Road America. In addition to third at Daytona, the co-drivers finished fourth at Sebring, which helped elevate Russell Ward and the No. 4 team to fourth in the GS driver and team championship standings.

The No. 56 Murillo Racing Mercedes-AMG GT4 of Jeff Mosing and Eric Foss has finished no lower than eighth in the year’s first three races, highlighted by a sixth-place finish at Sebring. Their consistency has moved the No. 56 team and drivers to fifth place in the GS driver and team championship standings heading into VIR.

The No. 65 Murillo Racing Mercedes-AMG GT4 returns to VIR with its usual driving duo of Tim Probert and Mosing’s brother Brent Mosing.

Gar Robinson, Driver – No. 74 Riley Motorsports Mercedes-AMG GT3:
“I’m always super excited to go to VIRginia International Raceway. I personally believe that it is one of the most underrated racetracks in the United States. It’s a true driver’s track and separates the good from the great. We’re carrying a lot of momentum from Road America, and VIR is one of our better tracks, so I’m excited to return. Our race at VIR on Saturday and the Indy 500 on Sunday is a perfect weekend.”

Lawson Aschenbach, Driver – No. 74 Riley Motorsports Mercedes-AMG GT3:
“I can say, without a doubt, that VIR is one of the best tracks in North America. It has a little bit of everything, including intense elevation changes, high-speed transitions, heavy braking zones and incredible grip levels. It forces drivers to push their, and the machine’s, limits while providing ample passing zones. I believe we have a great chance at success for the IMSA GTD race. It’s known that VIR ‘suits’ the Mercedes-AMG GT3, and that, along with the prior success of Riley Motorsports, will create a lot of confidence heading into the race weekend. The Mercedes-AMG GT3 is a very refined race car. The high downforce levels and stability give you confidence to attack high-speed transitions, long radius corners, and heavy brake zones, very important handling characteristics at VIR. There is no doubt this car loves VIR as much as we do!”

Dylan Murry, Driver – No. 35 Riley Motorsports Mercedes-AMG GT4:
“Well, the new Balance of Performance (BoP) definitely didn’t help us going forward with extra weight, but I think we can still do pretty darn well at VIR. It is a great track for our team since it is basically both my home track and Riley’s home track. I have had more laps there than anywhere else, so I’m confident that we will pick speed back up really quick. The Mercedes-AMG GT4 is a great hill climber. I think we will be really good going up the Esses. Another thing to mention is with our new Evo package, the added downforce and brake cooling has helped us under braking quite a bit. I think going off those long straights will be a strong point too for this year.”