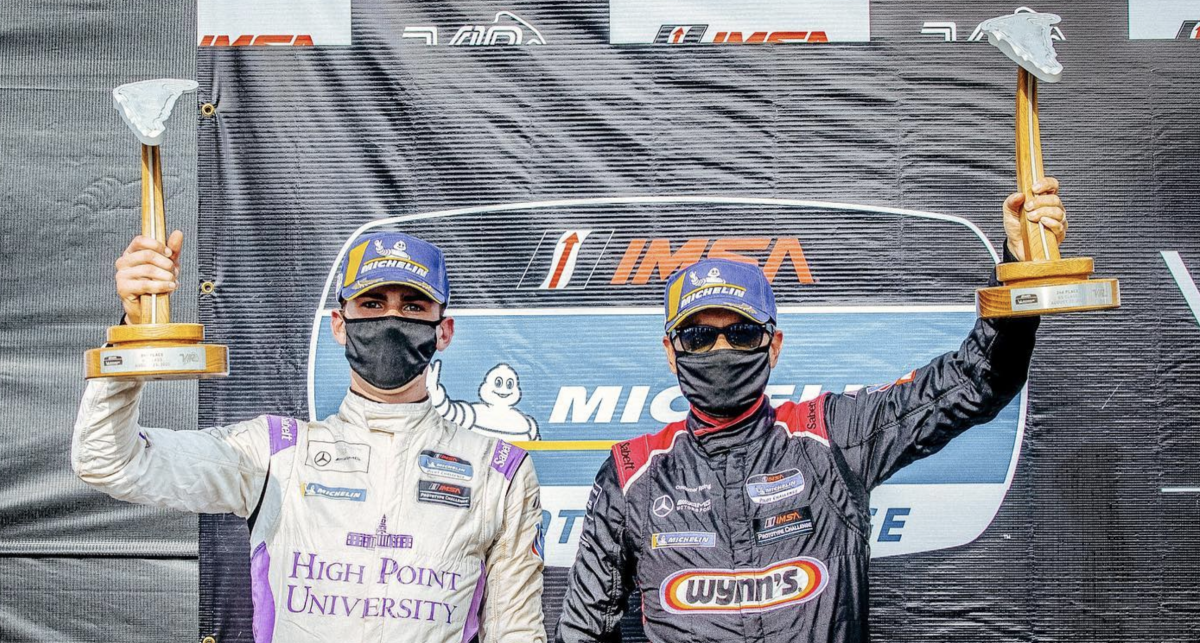 The No. 74’s podium came after Aschenbach persevered through a three-car fight in the last hour of the race for the final two GT Daytona (GTD) podium spots. The battle was a highlight of the on-track action from the two-hour and 40-minute race, but the excitement didn’t stop with the checkered flag.

Aschenbach crossed the finish line fourth, in tight formation with the second and third place cars, but the No. 74 was elevated to third when the competitor that took third failed the post-race technical inspection. 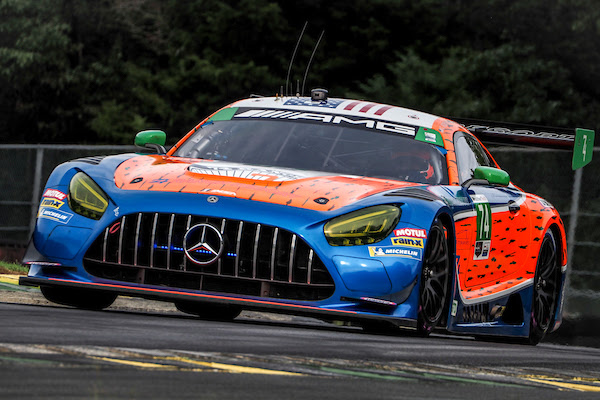 The third-place finish is the best of the season for Robinson, Aschenbach, and the No. 74 team. The finish proved to be a satisfying and rewarding result following a challenging first half of the race.

Starting from the rear of the field after a pre-race tire change, Robinson moved into the top 10 in his race-opening stint. He pitted to hand off to Aschenbach just past the 45-minute mark, only to see the No. 74 assessed a pit-speed violation penalty.

With Aschenbach now at the wheel, the No. 74 fell to the back of the field and behind the leaders after serving the penalty, but a caution minutes later gave the Riley team the opportunity it needed to get back in the race.

Aschenbach was able to close in on the field and quickly went to work on improving several positions when green flag racing resumed. The No. 74 moved to third in the race’s late stages, battled for the position in the closing minutes, but then regained the podium spot after the competitor’s infraction. 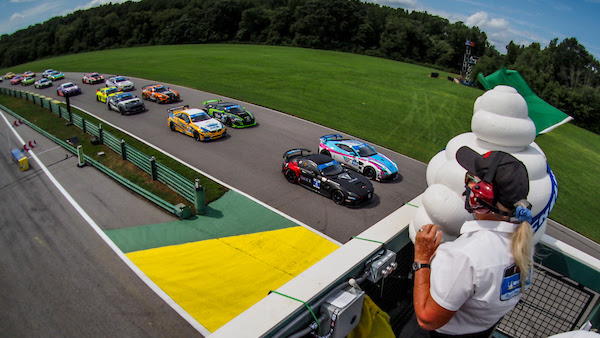 Ward led the field to the green flag, but his time upfront was cut short with an off-course incident going into turn one. Ward recovered and climbed back into the top five only to see the No. 4 come to a stop on track with a loose battery cable. The team returned to the race several laps down with Indy Dontje driving, but the No. 4 was never able to work its way back into contention.

The No. 35 Mercedes-AMG GT4 of Cox and Murry picked up where the No. 4 left off and ultimately battled for the victory at the end of the race.

Cox ran competitively in the top-10 in his race-opening stint before pitting to hand off to Murry just before the halfway mark. A well-executed stop and driver change by the Riley team put Murry in the top three and in contention for the win.

Murry pulled off a pass for second place in the final 30 minutes but didn’t have enough time left on the clock to challenge the eventual winner.

The runner-up finish is the best for the No. 35 team since they won the season-opening Michelin Pilot Challenge race at Daytona in January. Those top showings, and a string of other consistent finishes, moved Cox, Murry and the No. 35 team from third to first in the GS driver and team championship standings. 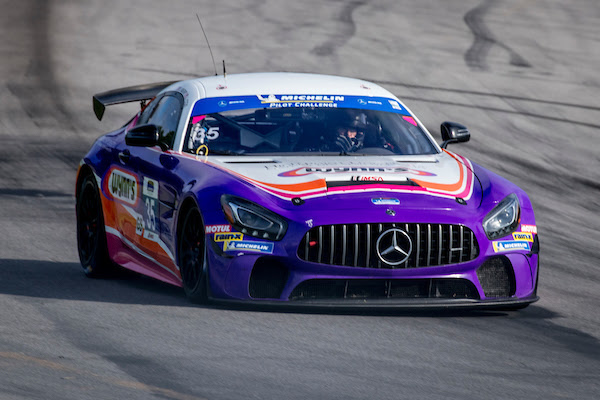 With four of the year’s 10 races now complete, the No. 35 team and drivers have moved to first place with 117 points, two ahead of the closest competitor and five points clear of the third-place team and drivers.

The No. 35 was the first of three Mercedes-AMG GT4 competitors in the top-10 at VIR.

Bryce Ward and returning co-driver Philip Ellis finished seventh in the No. 57 Winward Racing Mercedes-AMG GT4. The finish was the best for the team since a runner-up showing at Daytona, the only previous time this season Ellis co-drove with Bryce Ward.

Ninth at VIR went to the consistent pairing of Jeff Mosing and Eric Foss in the No. 56 Murillo Racing Mercedes-AMG GT4. Mosing, Foss and the No. 56 team are now fourth in the GS team and driver standings with 94 points. 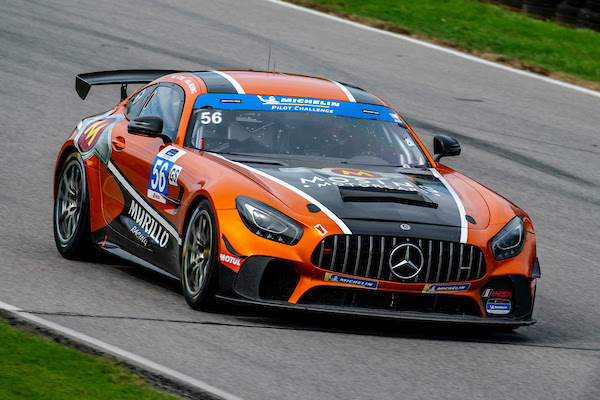 Bryce Ward and the No. 57 round out the current top five in the GS driver and team standings with 92 points.

For the second-straight event, the WeatherTech Championship will race on Saturday while the Michelin Pilot Challenge takes to the track on Sunday at Road Atlanta.

The first IMSA endurance races since the season-opening Rolex 24 At Daytona, Saturday’s WeatherTech Championship race will be six hours. Sunday’s Michelin Pilot race will be four hours in length. 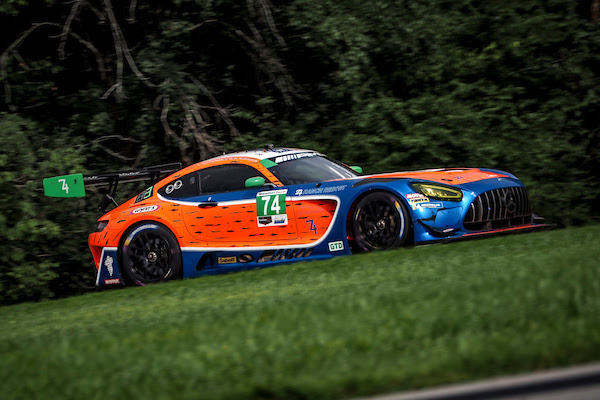 Lawson Aschenbach, Driver – No. 74 Riley Motorsports Mercedes-AMG GT3: “We had a really good Mercedes-AMG GT3 and in some ways the race kind of fell to us to some extent. The guys did a great job in the pits, we did everything we needed to do, so an unexpected bump to third place is exactly the momentum we needed to mark the halfway point of the season. Thanks to the entire Riley Motorsports organization for their dedication. Our expectations are high heading to Atlanta. We are firing on all cylinders.”

Jim Cox, Driver – No. 35 Riley Motorsports Mercedes-AMG GT4: “Back on the podium is always a great day. This has moved us back to P1 in the championship, which is obviously our big goal for the year. It was a fabulous team effort, the Riley guys from the shop to the track were obviously on their “A” game. And then the young phenom, Dylan Murry, showing that he is a wheel man. I couldn’t be happier.”

Dylan Murry, Driver – No. 35 Riley Motorsports Mercedes-AMG GT4: “We had a really strong car this weekend. Our Mercedes-AMG GT4 was absolutely phenomenal, and it was great to have a podium finish. I wish we could have had just one more spot, but it’s racing, and you can’t win everything. It is disappointing, but I am very happy we’re back in the championship lead for the first time since Daytona. It is comforting to know that. Two points ahead of second place. It’s been a tight year, and I’m excited to move to the future of this season back into the lead.” 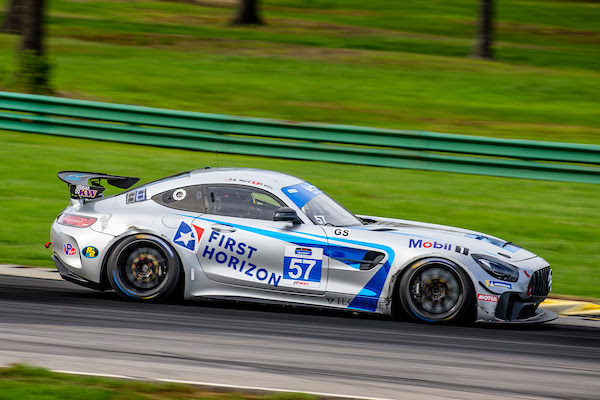 Philip Ellis, Driver – No. 57 Winward Racing Mercedes-AMG GT4: “This was my first time at the VIR track, and the first time in the Mercedes-AMG GT4 since back in March when we had a test at Sebring. It’s been quite a while, and it was actually quite hard to get a rhythm earlier in the weekend because we didn’t get a lot of run time because of a red flag. Bryce and I went into qualifying and the race with about four laps each and that makes things a lot harder. Bryce did a good job in qualifying for the time that we had in the car. The car was very good on new tires, and I could make up a lot of positions, but we didn’t take tires at the end. It was a bit unfortunate; I think there was more in it just from the pace of the car, but with the circumstances we can be happy.”