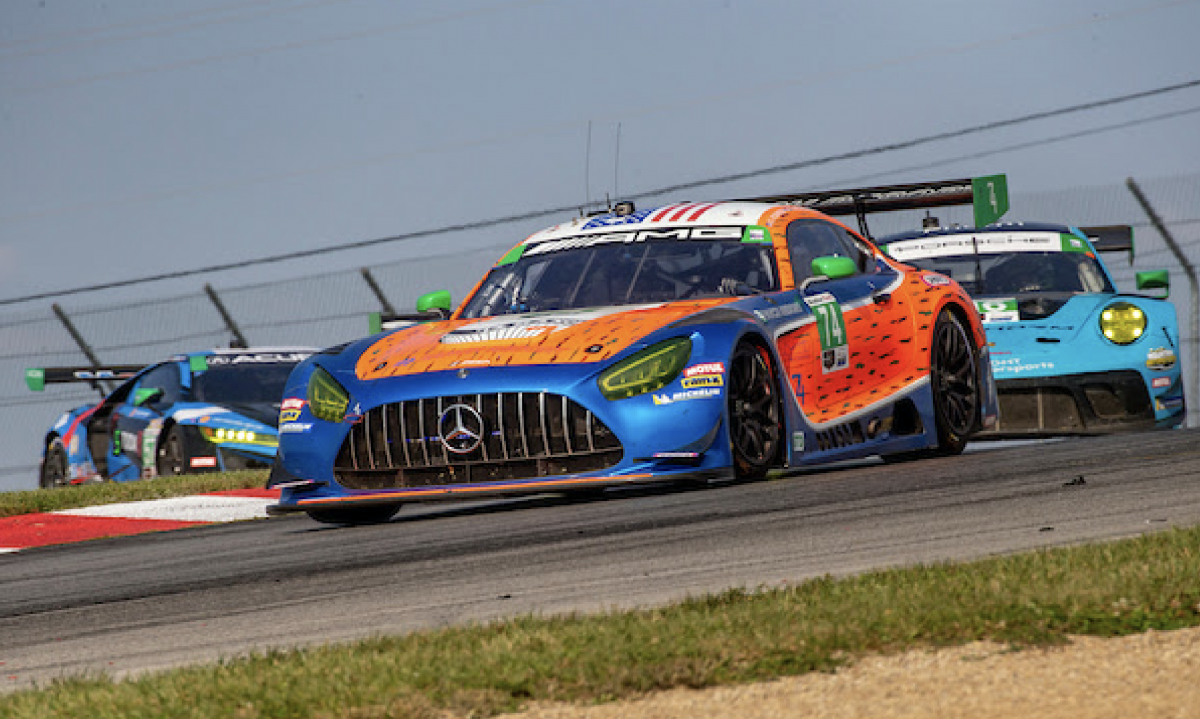 The No. 74 team and drivers came to Mid-Ohio primed to deliver a strong result, following a run of top-four GTD finishes in the two most recent IMSA WeatherTech Championship races, including a third-place finish in August at VIRginia International Raceway (VIR).

Robinson qualified and started 10th in the GT Daytona (GTD) field but quickly moved up a position on the opening race lap, starting a steady climb to the front throughout his race-opening stint. He took the lead for a lap before pitting under caution, handing the No. 74 off to Aschenbach just past the race’s 45-minute mark.

Quick pit work by the Riley team put Aschenbach back in the race just outside of the top five. He set a pair of fastest race laps early in his stint, including a time of 1:21.644 (99.563 mph) that stood as the fastest GTD lap of the race on the 2.258-mile circuit.

The Riley team called Aschenbach to the pits for the final time with just over 60 minutes remaining in the two-hour and 40-minute race, and another well-executed stop put the No. 74 back in the race in fourth place.

Aschenbach continued in pursuit of the leaders, taking advantage of an incident between the second and third place competitors to move up to second in the race’s final hour.

A green flag restart less than 30 minutes from the finish opened the door for a possible move on the leader, but the No. 74 was never quite close enough for Aschenbach to attempt a pass for the lead. He kept the pressure on to the finish and the drove the No. 74 under the checkered flag merely 0.858 of a second behind the winner.

The IMSA Michelin Pilot Challenge series ran a doubleheader schedule of two-hour races on Saturday and Sunday. On both days, a Mercedes-AMG GT4 reached the podium.

The Riley team’s second-place Michelin Pilot Challenge finish on Sunday followed a rebuild of the No. 35 Mercedes-AMG GT4, after it was side-lined with front-end damage early in Saturday’s race.

Cox qualified the repaired car in the top 10 and kept it there throughout his race-opening stint. Murry took over at the race’s halfway mark and a flawless pit stop put him in the lead right at the start of his race-closing stint.

Murry led the race twice for a total of 12 laps, losing the top spot only after unintentional contact from another Mercedes-AMG GT4 competitor. At the wheel of the No. 57 Winward Racing Mercedes-AMG GT4 he co-drove with Bryce Ward, Alec Udell was setting up a pass on Murry for the lead when the two cars came together. 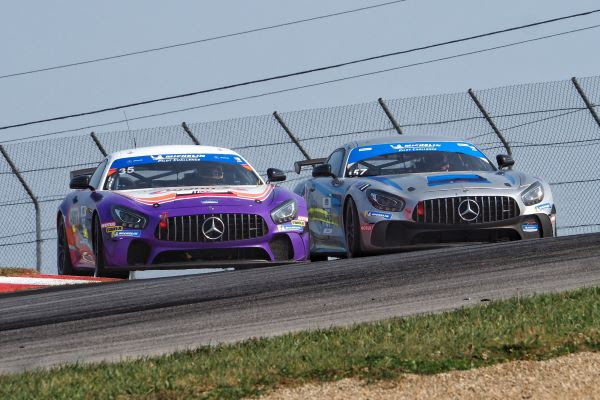 Murry and Udell continued after the incident but not before the eventual race winner slipped by both Mercedes-AMG GT4s to jump from third to first.

Murry maintained second in the late stages of the race, but was never able to get close enough to the leader to attempt a pass. He drove the No. 35 across the finish line in second, 6.473 seconds behind the winner.

Udell led 11 race laps in the No. 57 but fell out of contention to an eventual sixth-place finish, following race officials assessing a pitlane drive-through penalty for incident responsibility in the contact with the No. 35.

The No. 56 Murillo Racing entry made three Mercedes-AMG GT4 finishes in the top seven when Eric Foss – who took over from starting driver Jeff Mosing – took the checkered flag just behind Udell.

In Saturday’s first Michelin Pilot Challenge race, Ward and Dontje battled in the lead pack throughout the race, crossing the finish line third just 2.552 seconds behind the winner. 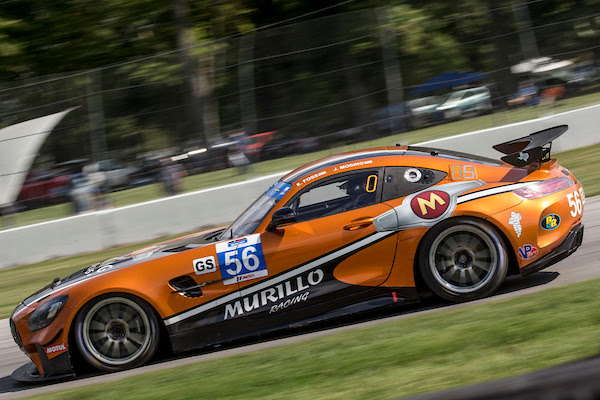 Bryce Ward and Udell finished fourth in the No. 57 while the No. 56 of Mosing and Foss, which led 22 laps in the race’s final hour, ended in 10th after a late pit stop for a splash of fuel.

Russell Ward was also competitive from the start in the No. 4 in Sunday’s race, but was knocked out early by another competitor while making a pass for third place.

Next up for Mercedes-AMG Motorsport Customer Racing teams in the IMSA WeatherTech SportsCar Championship is the GT only event, Motul 100% Synthetic Grand Prix, at the Charlotte Motor Speedway “Roval,” October 9 – 10.

Gar Robinson, Driver – No. 74 Riley Motorsports Mercedes-AMG GT3: “We’ve just been that close it seems for the last two or three races. I know Lawson has a lot of time here, he really enjoys this place, and I do too. This is the spot of my first pro win, and I think we did pretty well here last year too, pace-wise. It’s finally good to get the monkey off our back with our best finish of the season, and there’s only one more place to go after this one. I just made sure I gave Lawson the best car I could and tried to give it to him in a good enough position. I think the next race at Charlotte will be a lot of fun.” 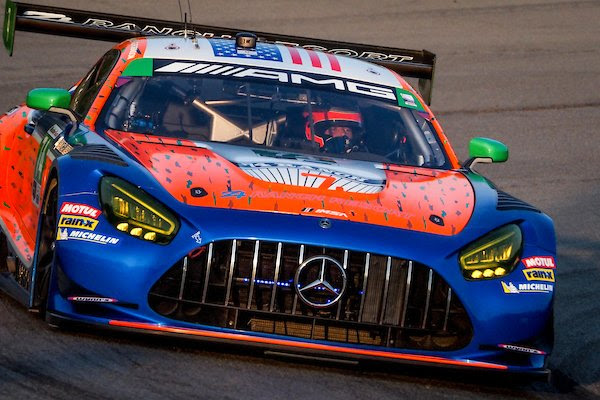 Lawson Aschenbach, Driver – No. 74 Riley Motorsports Mercedes-AMG GT3: “I’m really proud of this one. We have been so close all year long, the guys have been doing a great job with the car set up and a great job in the pits. Gar is getting better and better every weekend. I feel like it finally just came together for us in this race. I’m not exactly sure how we jumped everybody in the pit lane, but the guys killed it on the pit stops and got us track position. Thankfully, it was just a matter of staying out of the carnage, making sure I didn’t hit anybody, and pushing as fast as I could to try to catch the leader. I’m really proud of this group, really proud of this finish, and thanks to Mercedes-AMG for a hell of a car. This Mercedes-AMG GT3 has been on rails all year. Any track we go to, it is fast, it’s consistent and it makes my life a lot easier! I’m proud to be bringing that Mercedes-AMG flag home each weekend.”

Dylan Murry, Driver – No. 35 Riley Motorsports Mercedes-AMG GT4: “All the Riley Motorsports guys the past week, they’ve been working their tails off. The car ended up getting tubbed after Road Atlanta. They had to rebuild the entire car and they did that in two days. Then we got the radiator punctured yesterday, so they had to basically rebuild the front end. Riley Motorsports is just an outstanding team, and it is really an honor and a privilege to get to work with them. Today was probably the biggest rollercoaster of emotions that I could think of. We took the lead on the first lap that I went out, then the No. 57 passed us square and clean the first time. I guess at the end they just got a little impatient and tried to make a pass that maybe shouldn’t have been done. At least we rolled out of it with a second place. I’m not satisfied with it, but nothing’s ever good enough short of a win. I think for points, we’ll move up a couple of spots, and that will be good.” 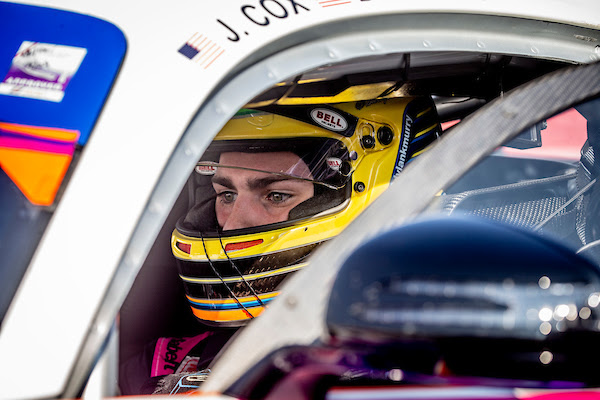 Jim Cox, Driver – No. 35 Riley Motorsports Mercedes-AMG GT4: “First of all, it’s great to be back on the podium and get some momentum back in our season. We’re going back to Road Atlanta, that both Dylan and I love. Hopefully, we won’t have the same misfortune as we did the last time. The real key is the Riley guys. They’re working 24/7. There’s nothing that can happen that will keep them from giving us a race-winning car. They did it again last night. It allowed us to have a great qualifying run and a much better finish today. Off to Road Atlanta!”

Russell Ward, Driver – No. 4 Winward Racing Mercedes-AMG GT4: “Winward had the fastest lap of the race today, which is really nice. Alec did a fantastic job. The team did a great job as well and getting back on the podium with Indy just feels awesome. This is a really tough series. Nobody is messing around. Nobody gives an inch, and everybody wants it as bad as we do. It’s awesome to be back up there. The Mercedes-AMG GT4 is just on rails. It is super easy to drive, Mercedes-AMG builds these cars to win and it shows. It is super reliable, and to me it’s one of the best cars in the field. It’s a pleasure to be driving it.” 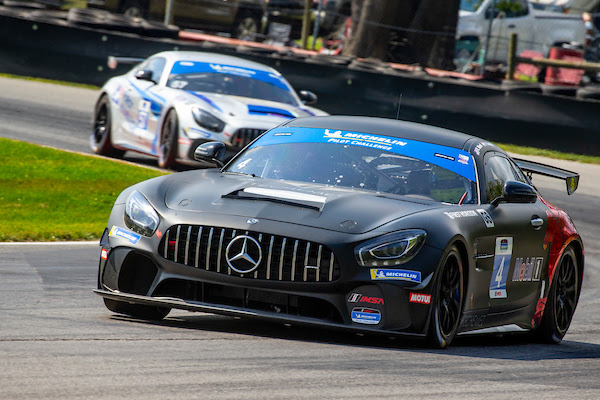 Indy Dontje, Driver – No. 4 Winward Racing Mercedes-AMG GT4: “It was really good to be back on the podium with Russell after our first one back at Daytona. The Mercedes-AMG GT4 pace all weekend was very good, just a little bitter end after the collision. I think Russell made a great move, but I guess the other guy didn’t see him or just steered in. So, we touched and then we fell out. That was a shame, but if you look back to Saturday you see the great execution of Winward Racing. Hopefully, the team can keep the momentum going the next few races. I have some races in Europe, so I won’t be back until Sebring at the end of the season. Looking forward to that last race of Sebring because we were fourth last time and I think we can do pretty well there again.”

Bryce Ward, Driver – No. 57 Winward Racing Mercedes-AMG GT4: “It was a really great run. I really enjoyed the track. We put ourselves in a position that probably could have ended in a podium. We had a little bit of a slip up on the way out, but that’s racing. It’s a little unfortunate, but I’m looking forward to the next race. It takes just a little while to get up to speed. We don’t get our tires in really quickly, but once you get the tires in and the car is ready, we have a fantastic car. The Mercedes-AMG GT4 is really awesome. If you get in some clear air you can really put the laps down. It’s really important to start in the front. Then you can keep it up there and away you go. It was a really great day.”