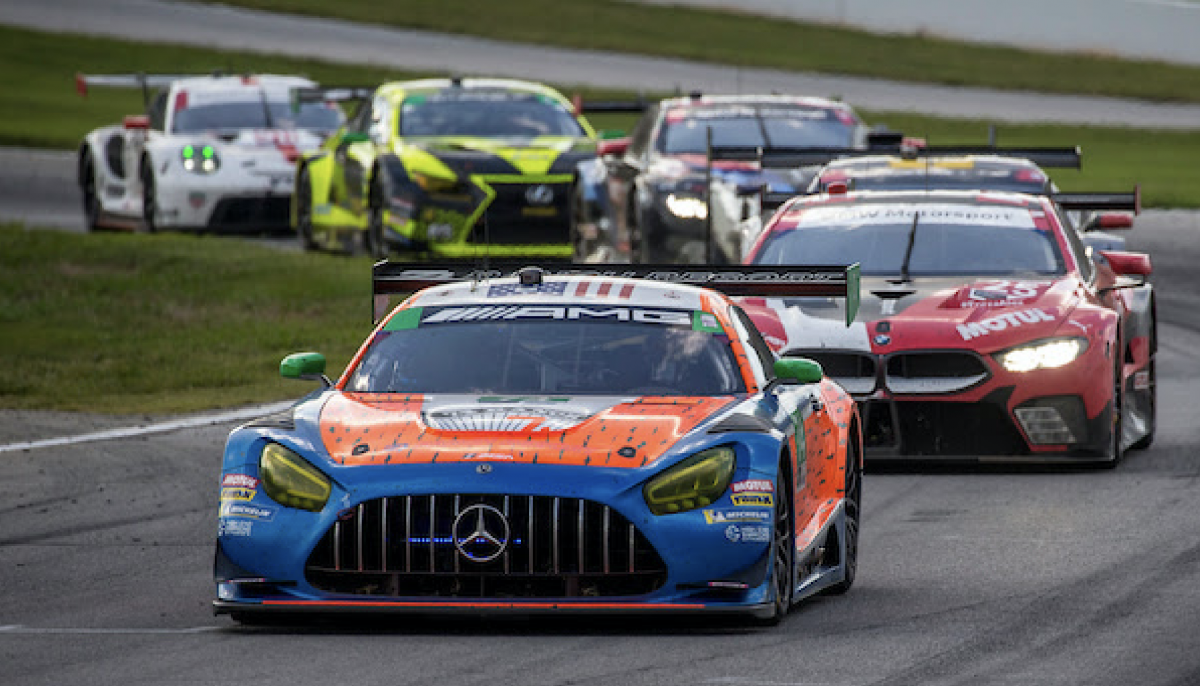 The No. 74 Riley team’s fourth-place run was the result of a well-executed and largely mistake-free race by the team and the drivers. Gridding 10th in the GTD field, starting driver Robinson steadily moved up throughout his race-opening stint, running as high as fourth late in his shift.

Keating took the wheel for the middle stint and drove flat-out in the peak heat of the day in green flag conditions for two hours. The fast and focused run kept the No. 74 on the race’s lead lap and well-positioned for closing driver Aschenbach to take over for the race’s final stint in the top five.

Aschenbach moved up to fourth place in the closing minutes and looked for a chance to make a move for third in a late-race restart, which made for a two-lap dash to the checkered flag.

Unfortunately, too many lapped or faster cars from other classes were in the mix and Aschenbach never had the chance to make a move for the final podium position. He took the checkered flag in fourth, only 4.576 seconds behind the GTD class winner.

Ward and Dontje rebounded from a Friday practice accident to earn the top-five finish in the repaired No. 4 Winward entry but inherited the position only when a fellow Mercedes-AMG GT4 team came up just short of a second-place finish.

After leading 39 laps and battling for the Grand Sport (GS) class victory with co-driver Jeff Mosing throughout the race, Eric Foss took the white flag in second driving the No. 56 Murillo Racing Mercedes-AMG GT4.

As Foss entered turn one, however, the No. 56 ran out of fuel and never made it to the checkered flag after one of the highlight performances of the race.
The No. 56 was credited with a 10th place finish, which kept Foss, Mosing and the team in the top five of the GS driver and team championship standings at the halfway point of the season.

Murillo’s sister No. 65 Mercedes-AMG GT4 entry of co-drivers Brent Mosing and Tim Probert was involved in one of the most unusual incidents of the race, involving another Mercedes-AMG Motorsport customer team.

Jim Cox came to a stop on course in the No. 35 Riley Motorsports Mercedes-AMG GT4 at the end of the race’s first hour, after a chunk of asphalt or on-track debris broke the car’s alternator belt.

Track safety crews were towing the No. 35 across the track on the hilltop area of the circuit, by the pit entrance, only to stop for some reason as the field approached under caution. Startled to see the No. 35 in the middle of the track, Brent Mosing spun and hit the Riley Mercedes-AMG GT4.

Neither driver was injured in the incident, but both cars were retired and listed as the last two finishers in the race.

Despite the disappointment after coming into this weekend’s race leading the GS championship, Cox, co-driver Dylan Murry and the No. 35 team still left Road Atlanta third in the GS championship standings, 13 points out of first place.

Gar Robinson, Driver – No. 74 Riley Motorsports Mercedes-AMG GT3: “The Mercedes-AMG GT3 performed excellently. This is the fastest I have ever been around this track. It’s been a big learning curve in my first experience at this track with these cars. I think we really earned this fourth-place finish. It just shows the never quit and always keep fighting attitude of this team at Riley Motorsports. They haven’t stopped impressing me since I got here. I think the team is coming together and we’re learning a lot about each other, especially when we get Ben to come in here as our third. Ben’s been so helpful with us this weekend because he knows the car so much better than us. Lawson did an incredible job. Ben did an incredible job, and I tried to do the best I could too. I think I ran a good race myself. I got a long stint at the beginning. We did pretty well there. I think we definitely have a lot of momentum and we’ll have a really good run at Mid-Ohio.”

Lawson Aschenbach, Driver – No. 74 Riley Motorsports Mercedes-AMG GT3: “First and foremost, the team executed flawlessly in the pits. The strategy was great. That is what Riley Motorsports does. We know they’re going to nail it- every time, every race, every pit stop – and I think that was a really big part of our day. On top of that, it’s a team effort here. Gar had a great stint at the beginning, and Ben ran two great stints to keep us on the lead lap. From that point forward, it was just head down and ready to go. We had a really fast Mercedes-AMG GT3. Once we got clear of some guys, I was able to lay down some good laps and close the gap on everybody. I wanted to make a move for third on that last restart but unfortunately the traffic it negated any type of passing or any opportunity.”

Ben Keating, Driver – No. 74 Riley Motorsports Mercedes-AMG GT3: “I was glad to be here because Road Atlanta really likes the Mercedes-AMG GT3. I had two hours of staying ahead of the leader so we wouldn’t go a lap down. Everybody did a great job. I feel like everything went well. It’s tough. You only have two one-hour practice sessions and we have three drivers to get through for this race. So, it’s really hard to get much setup work done. We improved the car there at the end of the race, came in fourth place, and I’m really happy with where we finished. The nice thing is that we will be back here next month with a 10-hour race. If we’ve got a good car right now, we’ll just put it in a box and bring it back in another month, and we’ll be good to go.”

Russell Ward, Driver – No. 4 Winward Racing Mercedes-AMG GT4: “Just to give a shout out to the guys, they really did an awesome job putting it back together. Sometimes I feel like it’s my goal to make their lives as difficult as possible! They did an awesome job and gave us a pretty good car. I struggled a little bit in my stint and kind of got mobbed by some of those guys, but overall, I think it was a really good performance. Indy did an awesome job as well. We had a little bit of a mechanical issue on the right rear that he struggled with for the last stint. It wasn’t much, just cost a little bit of pace that kept us from moving up, but we will take the top five and go to Mid-Ohio. The Mercedes-AMG GT4 is always good at Mid-Ohio, I’m looking forward to it and we’ll see how things go.”

Indy Dontje, Driver – No. 4 Winward Racing Mercedes-AMG GT4: “We finished the four-hour race. It was a pretty tough battle as it always is this year in the Michelin Pilot Challenge. Russell did a really good job at the beginning and kept it in the top 10. From there we just fought our way back. We were at one time lucky with the strategy and at another time unlucky, so it is what it is and we pushed the Mercedes-AMG GT4 as far as we could and up into the top five with a little bit of luck on the last lap. I’m happy, happy that we brought it home with maybe one or two scratches. It looks OK and now we can go on to Mid-Ohio for the doubleheader.”

Jeff Mosing, Driver – No. 56 Murrillo Racing Mercedes-AMG GT4: “It doesn’t matter where we finish as long as everybody is doing their best, and that’s what they’ve done. I’m just so proud of this team. They really executed everything perfectly. We really got a little bit lucky with coming in when we needed to come in, and then the course went yellow. That worked toward our strategy and we were just running away with it. Eric is so good around the corners. I took to heart everything that he taught me to the point of being 1.6 seconds quicker in qualifying than I was all weekend. I really trusted the car, the Mercedes-AMG GT4 just works so well in the corners, and it makes us so proud to have such a great product with us. We just want to try to get on the podium again. This team is very hungry, they know they can do it, and I know they can do it, and we showed it today.”

Eric Foss, Driver – No. 56 Murrillo Racing Mercedes-AMG GT4: “Our Mercedes-AMG GT4 was amazing. The handling of the car in both the low speed and the high-speed corners and the braking is just so amazing. The car is just so confidence-inspiring. I’ve driven a lot of race cars in my life, literally probably 100 different types of race cars, and this is one of the easiest cars to drive on the limit. We’ve shown the capability pretty much all year, but we’ve just had situations occur in the race. We’re just going to keep trying to overcome these obstacles, but we came so close.”

Dylan Murry, Driver – No. 35 Riley Motorsports Mercedes-AMG GT4: “This is one of those situations you can’t really control. Very unfortunate circumstances that we had this weekend. We lost the championship lead, but we are still third and it’s still only halfway through the season. So, we had this bad race but there’s nothing saying that other people can’t have a bad race. We’re not out of the hunt in the championship, so we just have to make sure we give our absolute best and just try to dominate the last half of the season.”