The breakout victory for the No. 35 Riley Motorsports Mercedes-AMG GT4 team, which carries the Wynn’s colors, is the first for Riley Motorsports and its trio of drivers in the ultra-competitive IMSA Michelin Pilot Challenge series.

Murry, Bleekemolen, Cox and the Riley team kept the No. 35 in contention throughout the race and sealed the win with a strategy call in the final stages to stay on dry-weather tires despite a late rain shower.

“We didn’t put on rain tires in that final stop and it turns out it was the right choice,” Murry said. “I’m blown away by Riley Motorsports, the Mercedes-AMG GT4 and Jeroen and Jim and everybody. This is very special for me.”

Cox started the race from eighth on the grid and survived some close calls and contact incidents to hand the No. 35 off to Bleekemolen in the top 10 and on the lead lap.

Bleekemolen, the full-season and longtime Wynn’s Mercedes-AMG GT3 teammate of Ben Keating, took the lead for the first time just past the race’s halfway mark. He shook off some in-race skirmishes of his own to give the No. 35 to Murry, who had to deal with the rain that arrived in the race’s final hour. 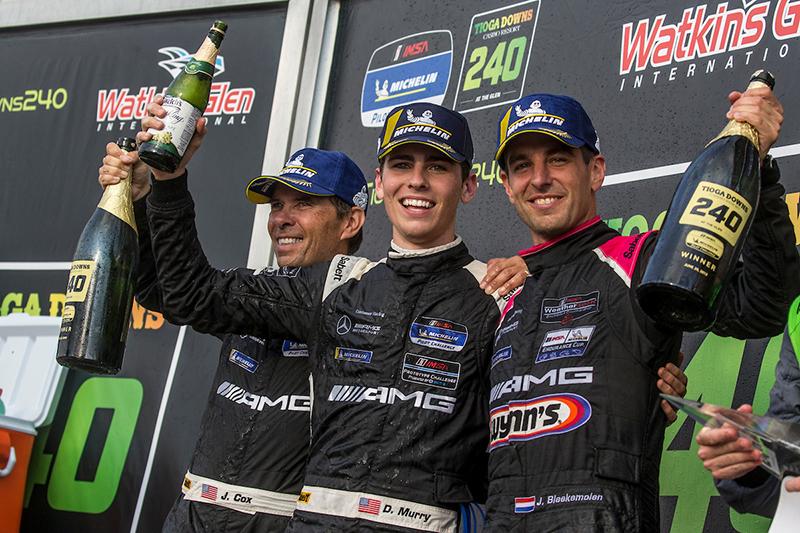 “You know how hard it is as a driver to stay out of trouble on dry tires, knowing that the people on wets are going to be quicker for a few laps,” Bleekemolen said. “It might come your way, but it might not. There’s a lot of uncertainty there. You just don’t know what’s going to happen. You’ve got to stay on track and pick the moment when to pass. Dylan did an amazing drive at the end.”

Outstanding pit work by the Riley team let Murry beat the competition out of the pits during the final round of stops with 40 minutes to go. He cycled back into the lead as the field completed its last pit stops and put the winning touch on the race in the run to the finish with 15 minutes to go.

Murry led the field to the green flag for a final restart but was soon passed by a pair of competitors on rain tires. Skillfully keeping the slick-tired No. 35 under control in the semi-wet conditions, Murry steadily reeled the two front runners back in during the closing laps. He retook the lead just over five minutes from the finish and went on to take the checkered flag with a 1.946 second margin of victory.

“We never fell off the lead lap and we were always in the fight right up until the end,” Cox said. “Obviously, great drives from Jeroen and ultimately Dylan in sketchy conditions. The kid is 18 years old. It’s unbelievable the maturity he showed in those closing laps.”

Watkins Glen was the third-straight Michelin Pilot Challenge race in which the No. 35 was the top performing Mercedes-AMG GT4. Cox and Murry co-drove to a second-place finish at Mid-Ohio Sports Car Course in May and finished fourth at Sebring International Raceway in March.

Noteworthy: Despite a far-too-early exit from Sunday’s IMSA WeatherTech SportsCar Championship race, the Mercedes-AMG Team Riley Motorsports No. 33 Wynn’s Mercedes-AMG GT3 team and drivers maintained their championship leads in the IMSA Michelin Endurance Cup. Ben Keating had a great race start in the No. 33 only to encounter a crashed-out car just three corners later. Keating could do nothing to avoid contact, and was uninjured in the incident, but the No. 33 was sidelined with left rear suspension damage. Having taken the green flag, however, the No. 33 and its drivers earned minimum points in the race’s two Michelin Endurance Cup segments, which was enough to keep its three-point driver and team championship leads, 29 – 26, heading into October’s Petit Le Mans finale at Road Atlanta.